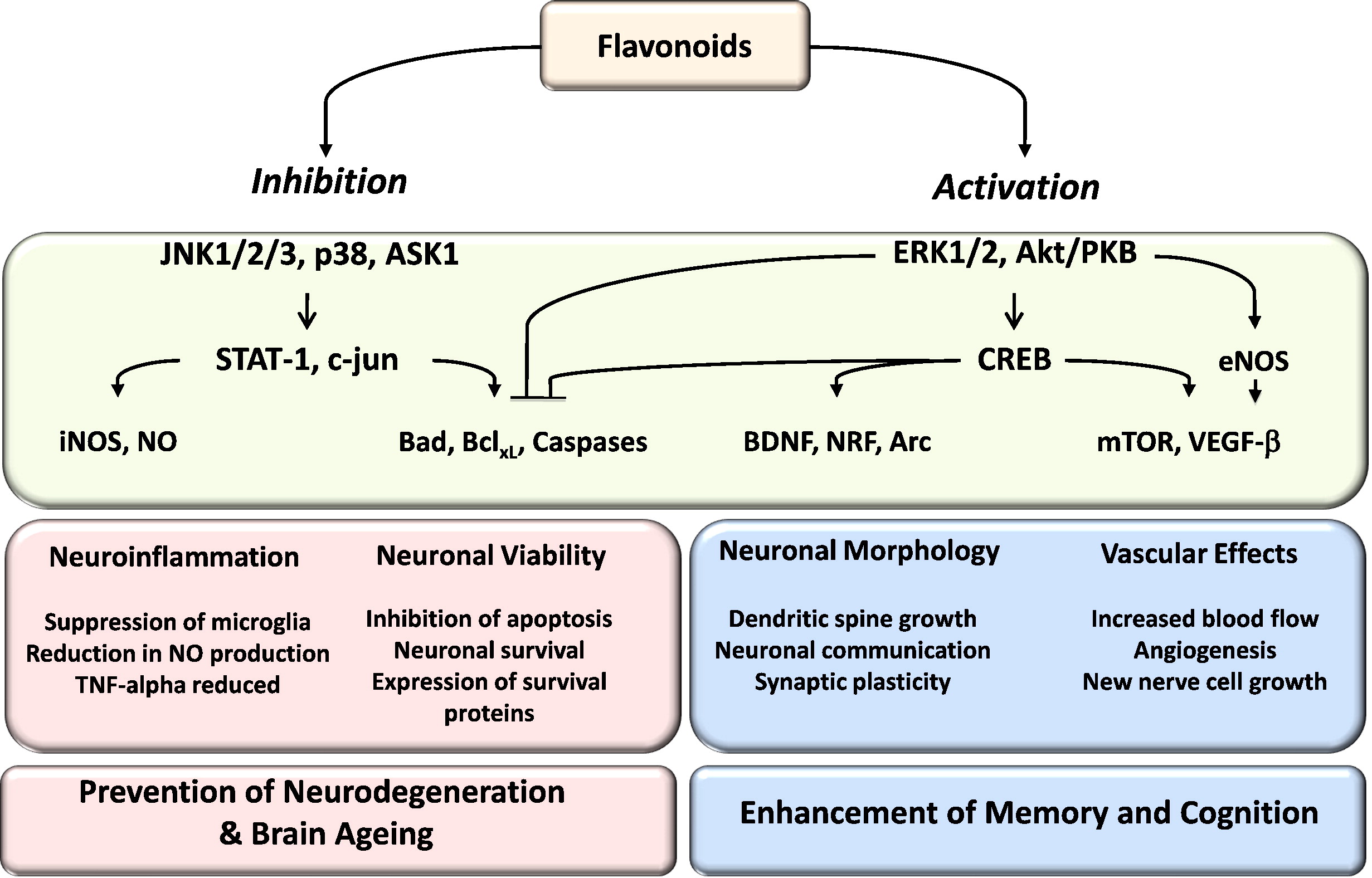 This figure is taken from Williams and Spencer (1), highlighting the various pathways through which flavonoids may act to protect the brain and improve cognition. Pay attention to this illustration as we go through this to stay with the detail, and by the end you’ll have a good in-depth understanding of how these non-nutritive, bioactive food components exert biological activity in the brain and nervous system.

The first thing to note is that antioxidant activity, traditionally considered the mechanism underlying the cognitive benefits of flavonoids, is not considered to account for their effect due to their low physiological brain concentrations: there is little evidence that flavonoids cross the BBB in significant quantities. Thus, the ability of flavonoids to exert an effect is due to sufficient quantities of flavonoids and, crucially, their metabolites, reaching the brain at low physiological concentrations and interacting with signalling pathways that regulate neuronal morphology [the shape of brain cells], viability [the proportion of live healthy cells], inflammation and vascular effects.

Both anthocyanins and flavanones increase and maintain levels of brain-derived neurotropic factor [BDNF], a critical molecule in learning and memory. Enhanced vascular function may also increase BDNF [‘Activation’ side of the figure, above], and flavonoids may increase BDNF through enhancement of endothelial nitric oxide synthase [eNOS] and increased cerebrovascular blood flow [CBF]. Both neurogenesis [the formation of new neurons] and angiogenesis [the formation of new blood vessels] are strongly correlated in the hippocampus, and increased CBF may facilitate neurogenesis through activation of eNOS, which regulates angiogenesis and vasodilation.

Flavonoid activation of the Akt/PKB and mTOR pathway [‘Activation’ side of the figure, above], a process also mediated through eNOS activation, may also influence the relationship between neurogenesis and angiogenesis. The ERK1/CREB [‘Activation’ side of the figure, above] pathway is believed to be a pathway associated with long-term effects, and sustained activation of this pathway from flavonoids may increase synaptic plasticity.

On the ‘Inhibition’ side of the figure, above, flavonoids may also exert protective mechanisms by influencing protein signalling pathways, including PI3, MAPK [p38] and NF-kB, that regulate inflammatory processes. This may underlie the suppression of neuro-inflammation by flavonoids. Uncontrolled activation of glial cells produces excess nitric oxide [NO], induced by increased nitric oxide synthase [iNOS] and TNF-a, stimulating neuro-inflammation through pathways which are inhibited by flavonoids. Flavonoids may also be directly neuroprotective, by inhibiting JNK/c-jun/caspase-3 pathways to prevent cell death caused by oxidized LDL-cholesterol. The inhibition of the caspase-3 pathway also serves to inhibit the action of pro-apoptotic proteins [i.e., inappropriate induction of cell death].