The ability for fat cells to store excess energy in the form of triglycerides is critical to metabolic health, and whether increasing adiposity is accompanied by metabolic dysfunction. Metabolic complications occur if triglycerides can’t be adequately stored in adipose tissue, resulting in excess circulating triglycerides spilling over into other organs and tissues, starting with the liver. What influences whether this occurs is metabolic changes in adipocytes which may impair storage capacity.

In this respect, there are two broad characterisations of obesity: hyperplasia and hypertrophy. Hypertrophic obesity is characterised by increasing size of existing adipocytes, however this is associated with spillover of fat to other tissues as the ability of hypertrophic adipocytes to store fat is exceeded by the ability of the body to create new fat cells to store excess energy in. As a crude analogy, think of a balloon filling up with water until it can’t hold anymore, and before you’ve got a new ballon the water has started to spill over.

However, hyperplastic obesity is characterised by an increase in the number of adipocytes, rather that enlargement of existing adipocytes, and these adipocytes are small, retain insulin sensitivity, release less free-fatty acids, and secrete anti-inflammatory signals. Hypertrophic fat cells are the opposite: cell size increases, greater free-fatty acids are released into circulation, insulin sensitivity is impaired, and inflammatory signals are secreted.

And this is where we get into important sex differences: abdominal adipocytes are more likely to be hypertrophic and pro-inflammatory, more likely to spillover into visceral tissues and organs, and have greater prevalence in men [and women with androgen-dominant conditions]. Conversely, subcutaneous fat tends to be hyperplastic, and  and has greater capacity to clear free fatty acids from circulation, and women deposit twice the amount of circulating free fatty acids in subcutaneous adipose tissue compared to men, particularly in the gluteal femoral region. This prevents free fatty acids from accumulating in visceral depots, and these effects appear to be mediated by oestrogen [hence the difference in cardio-metabolic risk in women between pre and post-menopausal periods]. 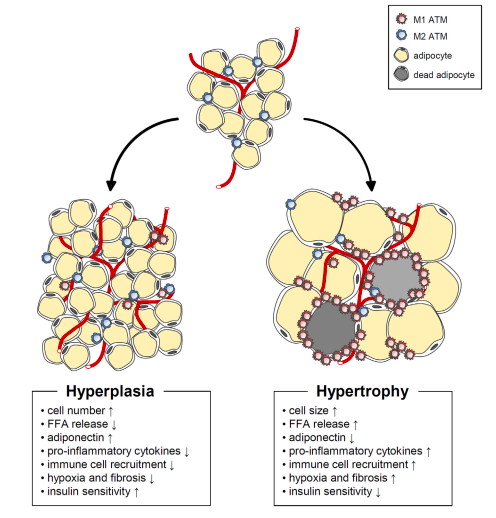