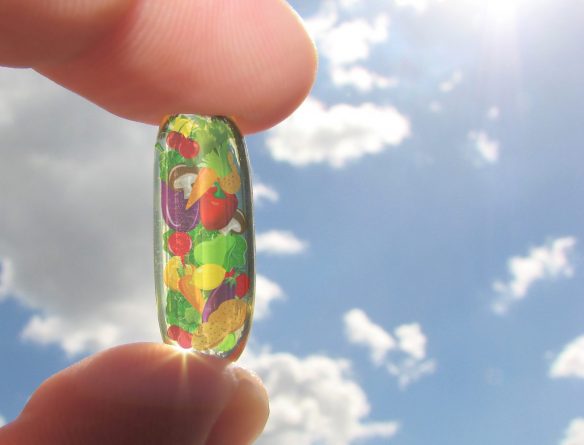 In the context of nutrition, the applicability of the precautionary principle – if in doubt, do nothing – can only extend so far, due to the human requirement for food.

With the nature of nutrition science, which inherently relies on multiple lines of evidence, observational research, perhaps only a few RCT’s in a particular area, even a ‘statistically significant’ result or small number of results leads to an inevitable conclusion: “we need more evidence”. The precautionary principle wins the day, and the do-nothing scenario continues.

What this creates is a state of suspended animation for nutrition, where many of the findings in a field with important implications for human health are in effect confined to paper. What it reinforces is a particular hierarchy for health interventions (1):

Let’s be very clear: there is nothing wrong with this hierarchy in principle, and there is nothing wrong with drug interventions. In fact, the growing “food is medicine” narrative is increasingly becoming a cause for concern, given the potential for the both healthcare professionals and the public to become dismissive of pharmacotherapy, and overestimate the role of nutrition in a given context.

Where the issue with that particular hierarchy may arise is with regard to the potential misunderstanding of when it is appropriate, or conversely when it may need to be reassessed. There appears to be an increasingly binary thinking of health interventions being one or the other, which can be problematic in two ways. The first is the context of application; misunderstanding of the role of nutrition, through lack of knowledge of the evidence, or a desire to overstate or understate the evidence relative to preconceived beliefs about diet and health [see the plant-based communities continued veneration of Ornish and Esselstyn in this regard, or the low-carbohydrate communities cognitive dissonance for Kevin Hall’s research]. The second is the context of evidence assessment; rather than fill gaps in the evidence with weak claims, evaluating evidence for nutrition interventions through application of a practical nutrition-specific framework to assess the evidence that is there, objectively.

The two are linked in an awkward feedback loop. This latter point above is the first potential issue with the hierarchy. It creates an assumption that food is so far down the ladder, recommendations can be made without a proper grasp of the evidence, while simultaneously elevating it to No.1 on the chart: a dangerous combination of under-competence and over-confidence, aka the Dunning-Kruger Effect. The primary justification for this elevation in the absence of education is an indifferent, “where is the harm?”

The aforementioned hierarchy may be responsible for underpinning such a conviction, stemming from the fact that medical professionals are trained in the context of risk assessment to consider risk relative to drugs, or surgical interventions, both of which carry a much higher risk potential and therefore onerous consideration for use. The translational issue is where this becomes a qualifier for fairly spurious or weak evidence for nutrition-related advice. This is the crux of this issue: it is not that there may be harm to a given nutrition intervention. It is about understanding the limits of nutrition for treating medical conditions, and understanding where the evidence starts and ends.

The second issue, which feedbacks to the first, which is the potential t0 conflate evidential standards that may apply to the decision to recommend drugs or food. It is not good evidence-based practice merely to assume that because the evidential qualities may not be equivocal, that justifies abandoning evidence-based standards. It is equally important to understand how to appropriately assess evidence for nutrition in the absence of pharmaceutical-grade levels of evidence.

If we’re waiting for nutrition advice to grounded in multiple, well-designed RCT’s amalgamated into conclusive meta-analyses, the field would be caught in a state of suspended animation. So, how do we use the evidence that is there to inform nutrition advice that may lack the full evidential standard that would be expected for medical interventions? To date, the most sensible proposition [certainly that I have come across] for considering how we use the evidence-base that is there is that advanced by David Rex, NHS Specialist Dietician, in the context of nutrition research on children with Autism Spectrum Disorder. However, it is not confined to that niche: it is an eminently pragmatic framework for how to assess the evidence for nutrition generally:

As Rex identified, in medicine only the first 2 questions are relevant. The answers are more exact due to the nature of a medicine being a defined chemical analysed through pharmacokinetics/dynamics, with clear therapeutic effects and an assessment of risk:benefit resulting. It is a simple model to measure the benefit and harm of the intervention to health.

On the other hand, questions 3-5 are particularly relevant for nutrition. Diets, and the foods comprising them, have a multiplicity of constituents which contribute to improve health, or to increase disease risk. While they can be analysed, their metabolism is much more complicated and often incompletely understood. As a result, it can be difficult to trace a full picture for understanding the interactions between nutrients and health, and precise, specific metabolism, action, and effects can be more difficult to detect than with medicines.

Thus, this 5-question framework becomes a practical tool to provide a more appropriate nutrition-specific evidence-based assessment. As an example, let’s consider at a dietary constituent with some evidence of benefit, but subject to the tag of “we need more evidence”: the polyphenol group, anthocyanins, and brain health.

The first cohort study to suggest an association with cognitive health was published in 2012, finding blueberry and strawberry intake was associated with delayed cognitive ageing equivalent to 2.5-years (2). Subsequently, on account of their high anthocyanin content, berry intake formed part of the recommendations in the Mediterranean-DASH Intervention for Neurodegenerative Delay [MIND] diet pattern associated with significantly reduced risk for Alzheimer’s Disease (3,4). In this respect, consider the aforementioned framework to determine whether we could use the evidence-base that is there in relation to anthocyanins:

Are there plausible mechanisms through which the nutrient, food or diet might help?

There is mechanistic evidence that would support the observed effects. Anthocyanin compounds in dark-pigmented fruit and vetegables, or more specifically their metabolites, remain in circulation for up to 48-hrs and reach the brain at low physiological concentrations where they interact with signalling pathways which regulate neurogenesis, neuroinflammation, and cerebrovascular blood flow (5).

Is there some evidence from clinical trials in favour of the nutrient, food or diet?

The critique of the trials typifies much nutrition research: small sample sizes, small and sometimes inconsistent effect sizes, short duration, potential confounding by other elements within the food matrix [less relevant in the top-down approach, as the exposure of interest is the food].

Is there evidence of marginal or excessive intakes at the population level?

No evidence of excess intake. Generally, berries are not a habitually consumed fruit in the UK and anthocyanin intake is low on average (13). Phytonutrient intake is lower amongst individuals not meeting recommended intakes for fruit (14,15).

Is the food, nutrient, or diet broadly consistent with “healthy eating” messages?

Are there populations who consume this nutrient, food or diet at this level, without obvious harmful effects?

Generally, the interventions use a dose of anthocyanins equivalent to around 150-200g dark-pigment berries per day (7-12). Certain Northern European countries consume higher levels of berries, corresponding with high intakes of phytonutrients, with no obvious harm (15).

In that assessment, a number of features emerge: a genuine lack of risk of harm, evidence of potential benefit to neurological health, and lack of habitual consumption. This assessment process provides a pragmatic framework to expand food-based advice in the context of already existing public health messages. It allows us to use the evidence-base that is there to assess the existing research, as it stands, holding in tension that there will always be gaps, always “more evidence needed”, always an imperfect evidence-base.

In relation to the risk of harm aspect, it is of course imperative to state that ‘risk’ in this respect relates to the food itself from a toxicity perspective; not the fact that there would remain a risk for neurological [or other] disease to any individual even if they consumed a food regularly. This point cannot be overemphasised, and provides a critical distinction between medicine and food: the risk:benefit analysis. This is vital for the manner in which the evidence is communicated. Because while that research is there, the bottom line is that one could eat all the polyphenols in the world and still be diagnosed with dementia and Alzheimer’s. And that is why food never has been, nor never will be, a “miraculous drug“. It is why food will never be medicine. Comparing food to a drug is irresponsible. It imparts a wholly unreasonable expectation for the public about the role of nutrition alone as a determinant of disease.

Food is not medicine. Food is food. Medicine is medicine. Conflating the two is problematic for the applicability of nutrition research.